Exploro Travel uses cookies that are set and necessary for the functionality of the site. You can delete and remove all cookies on the page, but then the page will not be fully functional. 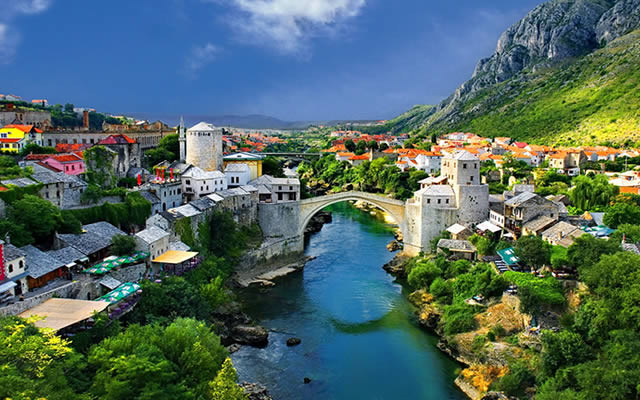 Explore Mostar where two different worlds are combined in one city, two religions, two cultures. See the famous Old Bridge of Mostar and the Turkish house, one of the most beautiful and preserved residential structures from the Turkish period, surrounded by the high walls which protected girls and women from view. Taste traditional Bosnian and Herzegovinian cuisine, try famous burek (a meat pie).

After picking you up at the prearranged meeting point or at your hotel, we will begin our journey with a drive to Bosnia and Herzegovina. At the beginning of your trip, you will be given a brochure about Mostar. After a one and half hour drive to Pocitelj, you will have a half hour free time to explore this beautiful Bosnian village from 15th century. After the break we continue to drive for additional half hour to Mostar.Mostar has long been known for its old Turkish houses and Old Bridge (Stari Most) after which it is named. Between 1992 and 1995 the town was badly damaged during the war in Bosnia and Herzegovina and much of the urban center was left in ruins and the Old Bridge destroyed. Since 1998 there have been major restoration projects carried out in the center of the Old Town, most notably the rebuilding of the Old Bridge. The Old Bridge was recently rebuilt and many of the edifices in the Old Town have been restored or rebuilt with the contribution of an international scientific committee established by UNESCO.